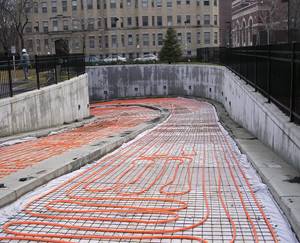 Proper distribution of heat is critical for concrete curing. With conventional thaw/cure hose, high temperature differential can cause two serious problems. The rate of curing is often very different from one side of the hose loop to the other. In certain situations, the different rates of curing can cause stress points and cracking thus reducing the overall quality of the concrete. When ambient temperatures drop well below freezing, the heat transfer in the cooler part of the “thaw/cure hose” closer to the return side may not be adequate to maintain proper curing temperatures. In an effort to raise that temperature in the cold zones operators often increase the supply temperature which means the area of the slab being heated by hose closer to the supply side is getting too hot which can “bake” the concrete.  Either scenario could lead to catastrophic failure of the concrete.

Utilizing the DryAir’s patented Smart Thaw System, “even” heat distribution will be maintained throughout the length of the “thaw/cure hose” and the curing problems, as outlined above, can be avoided.  The Smart Thaw System reverses the flow of glycol through the hoses at timed intervals so the entire cure pattern receives the same amount of heat.  Maintaining proper curing temperatures allows the concrete to cure to full strength in less time, with less fuel and with less potential risk of damage due to over or under heating.

The Smart Thaw System is available as a, stand alone, accessory for use when curing concrete using one of DryAir’s Central Heating Units as the heat source and is included as standard equipment in all greenthaw™ models. 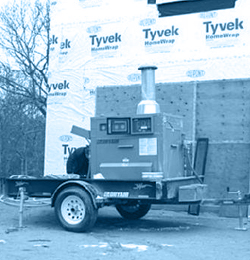